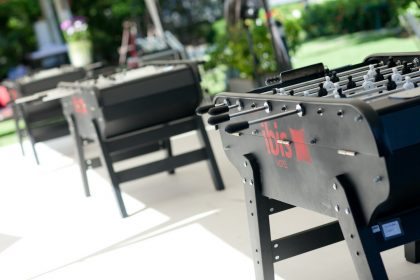 As I am a traveler who is obsess by foosball since I’m young, I’ve decided to share with you my finding and observations between two type of soccer table.

As European mostly considerate foosball as an authentic sport where they recon there is techniques and skills at stake, they follow accurate rules and techniques which guarantee a fair play. In this way, a perfect match need several conditions: a high-quality foosball table, a cork foosball ball and a good team

In some other country, Foosball isn’t recognized as a real sport and rather than a child game. This could explain the lower quality of the foosball tables.

However as American considered foosball a genuine play for teenagers, child and to chill in bars. The techniques and fabrication of the foosball table are quite different, because their meaning and uses is not the same.

So during my travelling experiences I’ve noted that American people don’t play as European do. Indeed, they are mainly play in garden or in any outdoor place. That’s why their foosball tables are generally built with plastic structure to resist to outdoor weather.

Nonetheless this structure impact the playing experience in a loads of way. First of all, the delicateness of the plastic structure forces to play with a moderated strength, Contrary to the European which the quality of the structure is really important to be able to play the game to the fullest.

The main reason why European foosball tables are the table which bring the better game for me is because of their composition in solid wood. It should be noted that this matter allows the best play experiences. Indeed, I think it’s important to play on a solid foosball table. That’s why the legs of the European tables are made in wood contrary to the American which are in plastic.

In supplement the matter of the playing surface strongly affects all the skills and techniques during games. In America, tables are mainly made with plain plastic but this substance don’t allow to play with real techniques and skills. This surface is often slippery and could bother the players during the match. This is even a frustrated feeling to see how the cork ball just grip on the surface.

European Foosball table are better concerning the coating of the playing surface. To bring the best control for the player, French foosball table’s playing surface are made with “Gerflex©” coating. Nowadays it’s the best playing surface materiel in the world, it is strong, flexible and grippy for better control and tricks. I remember the perfect slide feeling with this substance, with this coating I can put some powerful shots directly to the goal.

Other factors may be considered to have an authentic game experience: the players. You have to know that the substance of the players depending of the country. In America, there are generally built in plastic. They are made to be ergonomic and to have an ideal weight. One of their main advantage is that they provide good-weather resistance for both interior and exterior use.

However, the European Foosball’s trademark are the players in aluminum so much that European players swear only by these kind of players.

There is also a big difference about the player’s bars of the foosball tables. Indeed, on the American table, there is full bars, going through the table structure and it’s quite anesthetic and inconvenient. This is the contrary for the European which are with telescopic bars. So, it’s lighter and better control for tricks and speed shooting. With those bars, you will take a real game pleasure and you will quickly improve your level!

In an esthetic point of view, the main difference is in the color. American tables are quite flashy contrary to the others which are in traditional colors like classic natural wood, modern black or elegant white (perfect in villa and trendy places) 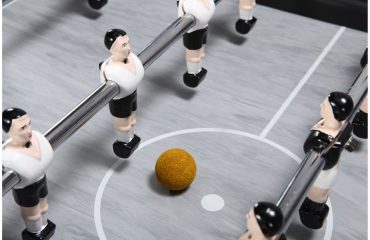 1 Comment to “How To Choose Between French Foosball Tables and American One?”